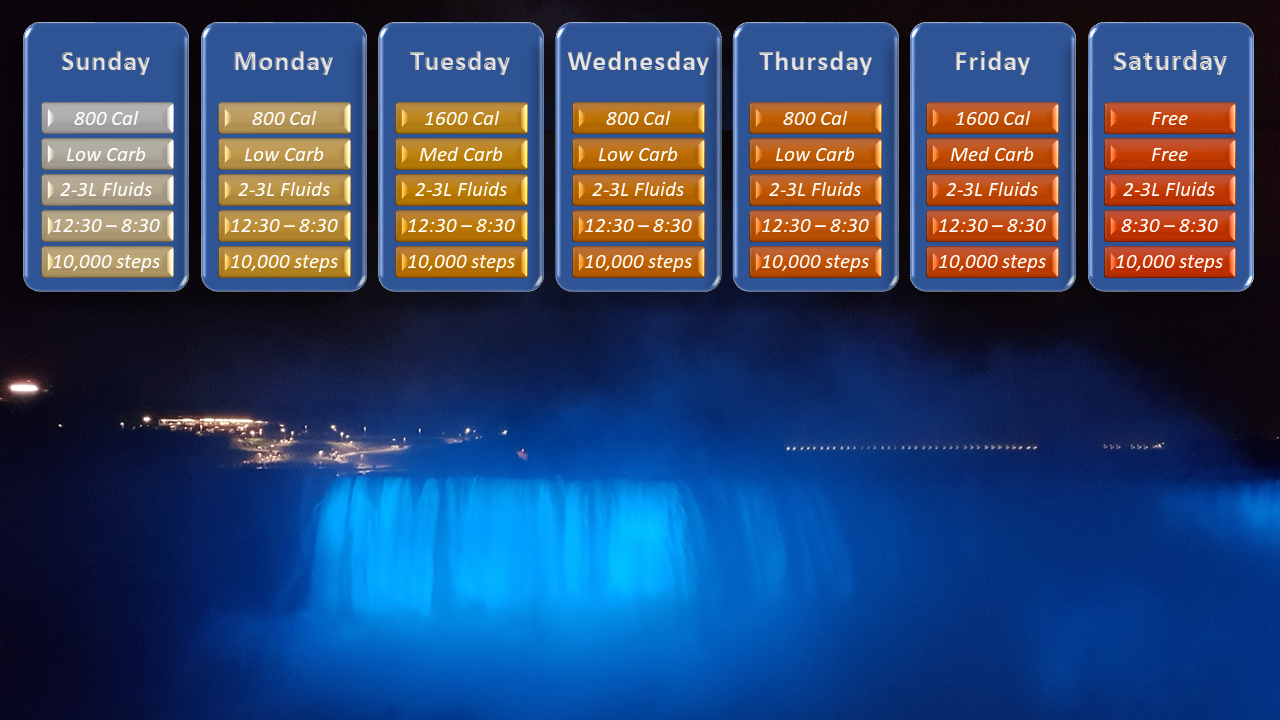 My current plan is to merge a number of different techniques together that I’ve managed to get to work in isolation.

The hardest is the calorie restriction. I still have not gotten the hang of how to manage within a set calorie limit as my default seems to be to want to consume between 2800-3200 calories per day, which is too much. I have managed to reduce that down for extended periods but its always been a challenge to keep it that way. And truthfully, society is set-up such that you actually can’t. Between birthdays, holidays, festivals, and other occasions, combined with the fact that eating out typically involves much higher calorie counts per meal, its a bit of a losing battle. Unless you compensate for that by eating in, preparing your own meals, and deliberately keep the calorie count down in a way that means under-eating during the normal course of.

My first step has been to stick to a 16:8 schedule for the past week, which I’ve been finding feels far more normal to me than 4-5 smaller meals starting within an hour of waking up.  So in general I’m going to see how long I can keep to that. Truly it would seem to me that unless there are other people around, it shouldn’t be that hard to maintain.

What I can tell you after going to this way of eating for about a week now, is that calories still rule. 16 hours of fasting isn’t enough to offset over eating even when its done in the 8 hour window.  What it has done however is help keep things in a bit more control for me. Obviously, if I’m not eating during the other 8 hours, then you consume less. But if your choices are still bad, then it doesn’t matter whether you consume them in 8 hours, 12 hours, or 16 hours.

Starting tomorrow however I’m going to go back to the carb cycling again using a restricted calorie count.

In general, the goal will be to consume

The selection of calorie intervals is not random. Its basically 1/3, 2/3, 3/3 and something that I would then adjust as I try to figure out exactly what my BMR is.

The calculated values do not seem to be correct. My BMR when I got down to 250 lbs suggested 2400-2800 calories would be okay based on activity level. However I had been gaining weight on that throughout the post-OptiFast period. This should have been a level that I should have been good at based on what I was eating prior to doing the program.

However, it is as I had feared in embarking on the program and is consistent with what they found with people on ‘the biggest loser’. Sustained low calorie consumption messes with your metabolism.

So, for the next 3 months to start, I’m going to try carb cycling with periodic inclusion of fasting (i.e. < 400 Cal/day). I’m not sure when I’m going to build in the fasting just yet. Nor for how long at a time. I had a couple of ideas on that which I’ll share later. For now however, the next step is getting the carb load under control.

There are a couple of websites I signed up to that provide ideas on low-calorie meals. For the medium calorie days I think I will probably check into some of those to see what I can do to mix things up. However on the low calorie days, I’m likely to try to stick to things that consistently worked for me previously.

Will be working on that tomorrow, and then hopefully next weekend I’ll have something good to report.