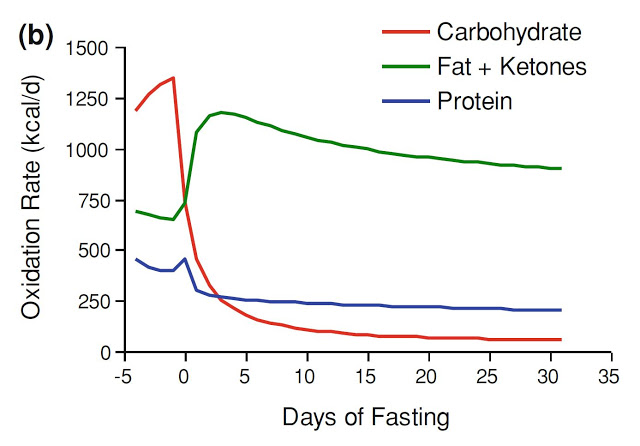 I can’t remember the last time I was under 300 lbs – I know it was at least five-six years ago. I realize this is temporary as once I go back to a normal diet I’ll put some weight back on but just seeing this number on the scale is a bit emotional.

I’ve realized an error in my tracking of body mass beyond using a different BMI formula. That is, in using BMI at all.

Notice that Lean Muscle Mass is going up. Now compare that to the image above[1].

Muscle mass must be lost during a prolonged fasting process in which only micronutrients are being consumed. According to this article in leangains.com[2] “In order to maintain blood glucose, conversion of amino acids into glucose must occur. This happens gradually and if amino acids are not available from food, protein must be taken from bodily stores such as muscle. “

The percentage of lean muscle mass consumed though is low as compared to fat depletion. This is likely due to the fact that the body is using fat and ketones for energy and only a minimal glucose level is required for other functions. Having said that, it is not possible for lean muscle mass to go up during this process as the necessary amino acids to build muscle are not being replenished through refeeding.

So, BMI on its own is a bit of a waste of time. Its always been know that this measurement is biased. To be fair the bias is shrinking in relationship to the other two measures that I’m using to keep track of progress. So I’m not dumping it just yet as it would appear that it is starting to converge at lower BMI values. But I’ve decided that I cannot use this as a factor in determining my stopping point for fasting as it is showing lean muscle mass going in the wrong direction.

So yes, I am changing my game plan again.

Keep in mind however that this is all new to me and so I’m feeling my way through what I hope is a sensible approach to using fasting to lose weight and change other habits that are in desperate need of changing.

Originally I was going to set a 10% reduction in LMM as my stopping point based on the three sets of measures I’m using to track progress. However, since BMI is not reliable, I’ve changed the criteria to be a 10% reduction in LMM based on either of the other two measurements, not including BMI, whichever comes first, rather than using a weighted average of the three.

I am estimating that I will likely be at that point Saturday so that is when I’m stopping my current fast regardless of whether I feel I can continue or not.

Currently I feel great. Again, no stomach problems, no back pain, no hunger pains that can’t be quenched by a glass of water. It is not about whether I can go for longer. It is a question of whether I should go for longer.

It is important to rebuild muscle mass periodically as you have no way of telling exactly where those amino acids are being taken from. It could be muscle that support your skeleton or it could just as easily be impacting major organs. So while I have no proof of this, I really feel that setting a realistic stopping goal to rebuild lost muscle is a better plan than just simply going all out and trying to drop 100 lbs through 60 days of fasting in one shot.

I’m going to be switching to a 4-2-1 approach as I described in the last post and see how well that works out. Will be dicey around Christmas. Worst comes to worst I can always do another 4-5 day reset in January once I’m back on my own again. Then keep to that for 4-5 weeks to see if it is a realistic approach or whether I need to do another 10-14 day micronutrient fast and try something else.